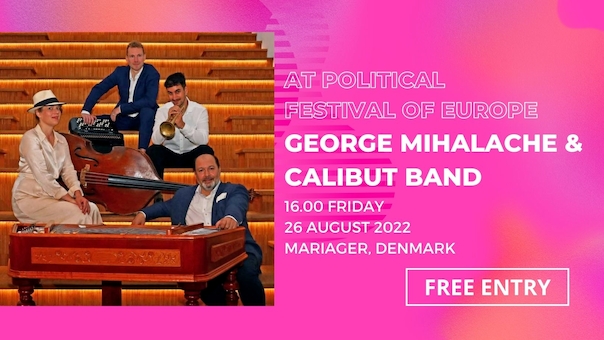 The magnificent ensemble Calibut Band, with George Mihalache in front, unites Romanian folk and gypsy music with wondrous jazz in a lightning quick, but also deeply nuanced soundscape. George Mihalache was born in Romania and grew up in a family of Romanian minstrels, the so called »lautari«, whose musical heritage goes back hundreds of years. Following in the footsteps of his predecessors, Mihalache learned to play Romanian folk music by ear, taught to him by his grandfather. Today, George Mihalache is a virtuoso Cimbalom musician - the standing string instrument whose unique sound is conjured by beating two sticks against metal strings - what is also called a "hakkebræt" in Danish.

The fact that George Mihalaches family was very open to Western music is clearly heard in his musical expression. George confronts the traditional notion of Romanian folk music, with its lightning quick melodies and unique scales, from new and creative angles. The jazz especially stands out with its deep and nuanced soundscape in what he himself calls »lautari jazz«. Calibut Band has perfected the mixing of gypsy music with jazz.

With him on stage George has the Tyrkish-Swedish trumpeter Ruhi Denise Erdogan, the Dane Simon Don Eriksen on accordion, as well as the Danish female jazz double bass player Ida Hvid. In 2015, Calibut Band released their highly acclaimed debut »Travelers« of which the Danish music magazine Gaffa wrote "A fabulous orchestra has delivered their debut, and a magnificent one at that. It is a music that has its own cinematic character, as if we were at a cowboy meet-up somewhere in Transylvania, with everyone shooting into the air.".