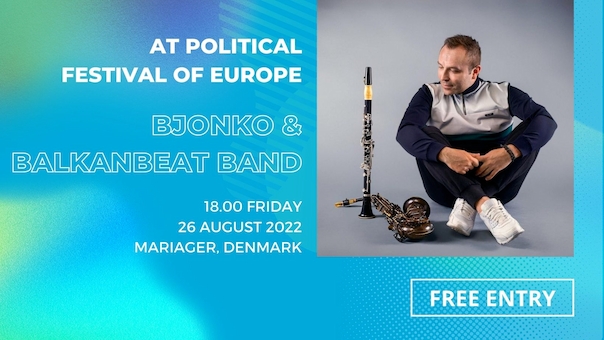 Bjonko Stosic is a Danish-Macedonian musician, producer, and composer, and one of Northern Europe's absolute best Balkan beats artists.

Bjonko Stosic is a Danish-Macedonian musician, producer, and composer, and one of Northern Europe's absolute best Balkan beats artists.

Bjonko represents a new style within the Balkan music tradition, a style which fuses current rhythmic music with Macedonian improvisation.
Bjonko and his band tour festivals and venues all around the world, while still performing at traditional local weddings. A combination of wild and intense Balkan beats, traditional Balkan folk music and contemporary mainstream genres is a good description of Bjonko's music.
Bjonko Stosic was born and raised in Copenhagen but is descended from a family of musicians from the city of Bitola in Macedonia. Playing the clarinet and the saxophone, Bjonko has developed a unique style, which he has performed with at festivals such as SPOT, Northside, and Smukfest. His empathetic performances have also won him a Danish Music Award in 2015 for "Danish World Live Name of the Year".
Bjonko performs in a variety of band constellations and have collaborated with artists and bands across musical genres, such as Fallulah, Klamfyr, Jokeren, Jooks and Illusionisten.